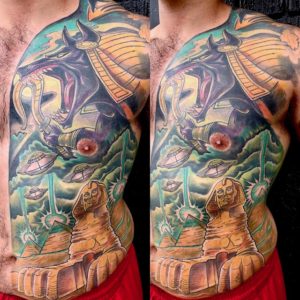 Tattoos are as popular now than at any time in living memory and there are several trending tattoos in 2019. This form of personal art is going to stay with you for the rest of your life, so it’s always worth knowing which trendy tattoos are out there and look at the themes that seem to be ageless and always on trend.

Tattoo artists have an excellent knowledge of what is fashionable and trendy. Like a fashion designer is to today’s dress sense, a tattoo artist can set trends and improve on the ones everyone seems to want to own.

If we chart back to the 1950s and 60s, when inking was popular among those in the armed forces, there was a time when tattoo pens seemed to be extraordinarily thick. There was also little regulation, unlike today.

During the 1980s the tattoo artist’s pen became a lot thinner and the technique improved to the point where body art used fine lines that appeared very thin. This trend still exists very much today.

A lot of tattoos in tiny detail are finding their way onto people’s fingers. Tattoo artists have often recommended against this practice, as finger tats can fade fast. But that has not stopped this becoming the latest in trendy tattoos.

This is particularly trendy in the east coast areas of the United States. The subject matter of the art can vary – as does the choice of colour – but the style and design is to think thin and make it artistic.

Minimalist body art and trendy tattoos are big because they are so small. The detail has to be tiny but accurate and the general idea is for the voyeur to be forced to study up close and personal. The accolades then come pouring out after the close inspection.

Many will remember the days when we were warned not to put names on our bodies. It was for fear the words would later return to haunt us: the name of an ex-boy or girlfriend, a football team or their latest signing [who would later transfer to a rival team]. But lettering has now come back as one of the trendiest tattoo methods, but the words are very different.

Gone are the ex-partners names, teams and even “love” and “hate” jotted on the fingers. In: the messages of something that expresses you as a person. Moreover, a meaningful script that belongs just to you.

Does Black Amethyst Tattoo Gallery have the Best Tattoo Designers in Florida? 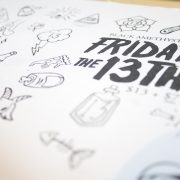 LOCALS GET LUCKY: $13 TATTOOS ON FRIDAY THE 13TH 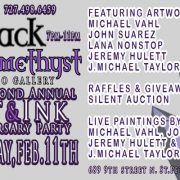 Tattoo Shops Clearwater FL to Mud Lake ID and beyond…

Red Flags When Going to a New Tattoo Shop