Get Your Nerd On

You are here: Home / St Pete Tattoo Blog / Blog / Get Your Nerd On

Get Your Nerd (Tattoo) On

Sixty-nine years ago, Dr. Seuss first used the word “Nerd” in his book If I Ran the Zoo, but he was talking about a creature he’d put on display next to a Ka-Troo, an It-Kutch, a Preep, a Proo, a Nerkle and a Seersucker. 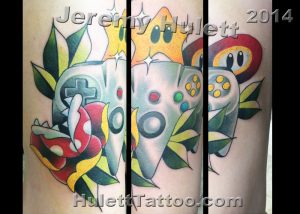 Not long after, “nerd” came to mean, well, you know… the same thing as bookworm, dink, dork, geek, grind, swot, weenie and wonk. Then came the onslaught of demeaning images in movies, on TV and in the press, based schoolyard harassment and encouraging a general dislike for the D&D crowd, among the so-called and never-really-normal normals.

Flash forward. These days Nerd Culture rules, with its own style, subcultural touchstones, fetish-adjacent activities and a world wide web of comrades, embracing shared interests and expression. Including – you guessed it – tattoos. But what exactly is a nerd tattoo? With social groups mixing and every dog having its day on social media, mainstream and dark, it’s no longer easy to classify.

Instagram has about 100K #nerdtattoo posts – more if you typo the hashtag – ranging from the magical (Accio, Harry Potter & co.) to the technical (UV lightsabres, anyone?) to the digital (8 bit 4 Evr) to various multiverses, multicultural and multilingual designs (Marvel, anime and Wubba Lubba Dubb Dubb, respectively).

Angry Birds on your upper arm show commitment coupled with an ever so slightly bad-ass temperament. Sean Connery drinking something shaken, not stirred, gives you a retro cool, vibe.

Hagrid, Lord Voldemort and Hermione Granger, individually or menaged up, pay homage to your magical childhood and he limitless horizons ahead of you. Naruto sleeves make you transcultural and under-the-radar hip.

Star Wars and Star Trek, with their casts of heroes and other otherworldly characters, from Captain Picard’s, “Make it so” to Princess Leia’s beseeching “Help Me, Obi Wan,” can take you from your current state of mind to a galaxy far, far away.

It’s fair to say, nerd is in the eye of the beholder. Have no fear of labels. Fly your nerd flag high. Celebrate what makes you happy. Wear ink close to your heart (event if it’s on your foot.)

Written by Rusty Smart with Black Amethyst Tattoo Gallery. Schedule a free consultation today to get started on your next guilty nerd love tattoo!