The Animal Kingdom and Their Tattoo Meanings

You are here: Home / St Pete Tattoo Blog / Blog / The Animal Kingdom and Their Tattoo Meanings

The Animal Kingdom and Their Tattoo Meanings

With this in mind, we’re going to break down the most common animal tattoo meanings by category:

The reason we are breaking these up, is because each category has it’s own overall meaning as well, and aspects can be carried over all the respective animals. For example, water animals represent various aspects of our emotions, intuitions, and even dreams. So each water animal will represent different characteristics of those. So let’s dive right in:

When it comes to air, you can start to think literally, and think on a higher level. Air animals usually translate into meanings of a higher intellectual thought. These animals are all about freedom, and represent a sort of limitless that we as humans tend to seek. They also can act as messengers and so can represent communication. A few common air animal tattoos:

* No, these are not full animals, but they do carry similar representations.

As we’ve been over, water animals are symbols of emotions, and can represent expressions of the unconscious, or dreams. They can also mean freedom and playfulness. It helps to think about water as a symbol itself, and how deep and powerful it is, but also think of it’s mystery. On the surface you only see so much, it’s only after you dive a bit deeper can you see more. A few popular water animal tattoos: 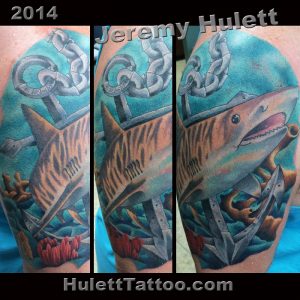 Land animals are a bit harder to group in terms of characteristics because a lot of them are different based on what type of environment they naturally live in. However, there is the overall fact that all land based animals have a deep rooted understanding, respect, knowledge for the Earth, along with a mutually benefiting relationship with nature. As you look more into certain animals, you’ll quickly see why so many people would choose to have a tattooed artwork of these animals. 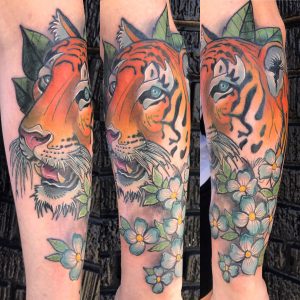 Reptiles are known for utilizing their environments to their advantage. Characteristics that embrace this are independence, awareness, intuitiveness, and even patience. They are a reminder that internal choices are powerful. Amphibians, since they have to be near a water source, has some water meanings behind them. They can also represent metamorphosis and embracing change.

Some examples of reptiles and amphibians chosen as tattoos: 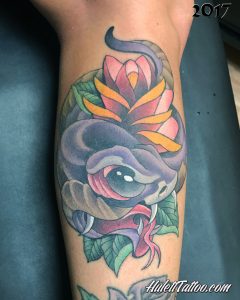 Insects, while at first may sound odd to some people, actually have a lot of symbolism behind them. From communication, to loyalty, and even protective and free spirited, insects are a popular choice in the tattoo community. Some ideas:

Did you see something that inspired you? Stop by Black Amethyst Tattoo Gallery and make an appointment to talk about some ideas to embrace your favorite animals.

No Tattooing in the Kitchen
Scroll to top